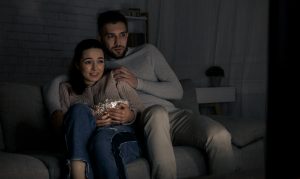 In the run-up to Halloween, even folks who don’t normally watch horror films might take in a scary flick or two. The scariest of them all, according to Ranker, is The Shining, followed closely by The Exorcist.

But here’s something you might not know: The adrenaline rush such movies deliver just might make you burn a few extra calories. More than a few, in fact.

At least, that was the finding of a small study conducted in England several years back, in which researchers measured energy expenditures while 10 subjects watched horror films. Here, too, The Shining topped the list with 184 calories burned.

That’s roughly the same as a 45 minute walk or 20 minutes of swimming laps at a moderate pace.

Why should this be?

“As the pulse quickens and blood pumps around the body faster, the body experiences a surge in adrenaline,” said study author Richard Mackenzie, PhD, former senior lecturer and specialist in cell metabolism and physiology at the University of Westminster, London, United Kingdom. “It is this release of fast acting adrenaline, produced during short bursts of intense stress (or in this case, brought on by fear), which is known to lower the appetite, increase the Basal Metabolic Rate and ultimately burn a higher level of calories.”

Of course, considering how easy it is to munch on popcorn through a flick or consistently dip into the Halloween candy bowl, there’s even less to recommend this as a weight loss method.

Still, other research suggests that controlled, short-term scares might benefit the body in some other ways, such as boosting the immune system. There’s even some evidence they can give your mood a lift.

“The research my colleagues and I have done show a high-arousal negative stimuli improves mood significantly,” says Margee Kerr, a sociologist and fear researcher and author of Scream: Chilling Adventures In the Science of Fear. These can be activities like watching a scary movie, or visiting a pop-up haunted house or Halloween-season attraction.

Kerr says that after a scary experience, people feel less anxious, less frustrated and happier. “The different neurotransmitters and hormones released during the experience could explain that,” she says.

But there’s another way that Halloween activities can be good for you, whether it’s group watching a spooky film, going to a party, or visiting a corn maze or other seasonal attraction: the social aspect.

Over the years, research has shown social interaction to have a wide array of short- and long-term health benefits. Social isolation, on the other hand, can be as much of a drag on health as high blood pressure, obesity, smoking, inactivity, and other physical factors.

“Face-to-face contact releases a whole cascade of neurotransmitters and…they protect you now, in the present, and well into the future, so simply…shaking hands, giving somebody a high-five is enough to release oxytocin, which increases your level of trust, and it lowers your cortisol levels, so it lowers your stress.”

She adds that, as a result of social interaction, “dopamine is [also] generated, which gives us a little high and it kills pain, it’s like a naturally produced morphine.”

These are the sorts of reasons why socialization is part and parcel of several of Dr. Joe’s keys to Radiant Health. Connecting with others can be a part of self-care. It’s necessary for service to others, and encouraged with respect to keys like exercise and stress reduction.

This isn’t to say you need to be a social butterfly to stay healthy. We all need alone time now and again. But we also need community – as small or large as we see fit – to truly thrive