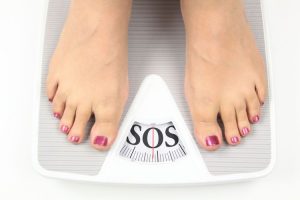 Specifically, its authors took a look at the effects of weight fluctuation in people with coronary artery disease (CHD), analyzing data from nearly 10,000 individuals. The results were striking, to say the least. For patients whose weight fluctuated the most,

the risk of a coronary event was 64% higher, the risk of a cardiovascular event 85% higher, death 124% higher, myocardial infarction 117% higher, and stroke 136% higher than it was among those…with the lowest variation in body weight in adjusted models.

In other words, the more variation, the greater the risk.

But there are a few important points to keep in mind here. For one, this was an observational study. It didn’t – because it can’t – show cause and effect. It can only show that things happened together.

Also, the “yo-iest” of the yo-yo dieters tended to share some other important risk factors. As WebMD reported,

Yo-yo dieters in the study were more likely to be heavier, smoke and have high blood pressure and diabetes, said Van Horn, a spokeswoman for the American Heart Association. Twice as many yo-yo dieters actually developed diabetes during the study.

“When you go down that list, some huge issues jump right out at you,” Van Horn said. “Across all of the likely candidates for what contributed to illness or death, the yo-yo dieting in and of itself was not the culprit. Those who were yo-yo dieters, as much as they tried to lose weight to lower their risk factors, still succumbed to the very risk factors we know all too well.”

This points toward something that can’t be stressed nearly enough: Being truly healthy means addressing all impediments to health, not just a risk factor or two. Of course, one or two is better than none at all, but creating and sustaining Radiant Health means taking a comprehensive approach to wellness.

You get the picture.

Losing weight in a sensible way can be a great start toward Radiant Health. After all, it usually involves addressing several components at once. For weight gain, as we’ve noted before, is seldom a simple matter of calories in, calories out. Overweight is often a multifactorial condition; a multifaceted approach makes good sense.

And being sensible about weight loss is perhaps the biggest takeaway from the new study. As Dr. Ira Ockene of the University Mass Medical School told Reuters,

“Studies show people set unattainable goals. Heavy people say, ‘I need to lose 40 pounds’ and they set a goal that is largely unattainable. And when they lose 10 pounds they’re disappointed. And they say, ‘What the hell’ and they just gain it back,” he said.

And there’s no one way to go about it, only the best way for you, based on your own specific health situation, needs, priorities, and values. Here in our holistic West Los Angeles clinic, we have a number of ways we can help you reach your goals, from the HCG diet to customized nutritional plans and integrative protocols.

The ideal? Make your weight-loss a long-term thing that supports your overall health and well-being.