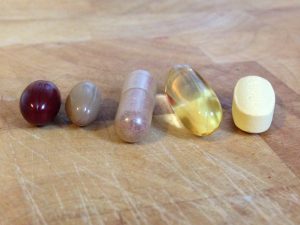 Let us guess: You take a supplement or two, don’t you? Maybe more than a few. You’re certainly not alone. According to one recent industry report, 77% of Americans report using them.

And evidence continues to suggest that nutritional supplements can play an important role in all manner of health and healing.

Just last month, a large new study in World Psychiatry looked at the role they might play in the treatment of mental health disorders. What makes it particularly compelling is that it reviewed over 30 meta-analyses of randomized, placebo-controlled trials, the gold standard of medical research, evaluating effectiveness while minimizing bias.

“The importance of diet for maintaining physical health is widely accepted,” the authors wrote,

due to the clear impact of dietary risk factors on cardiometabolic diseases, cancer and premature mortality. In parallel, the potential impact of diet on mental disorders is increasingly acknowledged.

While whole foods remain, of course, the best source of nutrients your body needs, supplements have their benefits, including the ease of therapeutically significant dosing and, in some cases, enhanced bioavailability.

there is an increased academic and clinical interest in the role of nutrient supplements for the treatment of various mental disorders. This growth of research is partly attributable to our evolving understanding of the neurobiological underpinnings of mental illness, which implicates certain nutrients as a potential adjunctive treatment for a variety of reasons.

Of all the supplements they considered, they found evidence strongest for polyunsaturated fatty acids, or PUFAs, easing symptoms of depression. Specifically, they found that omega-3 formulations high in EPA (eicosapentaenoic acid) significantly alleviated depressive symptoms, alone or in conjunction with SSRIs (antidepressants). The longer the treatment, the greater the effects.

Vitamin D, folate, and the amino acid N-acetyl cysteine (NAC) were also found to be helpful in various forms of depression: D for major depression; folate for unipolar depression; and NAC for depressive symptoms across other psychiatric diagnoses.

Magnesium, on the other hand, didn’t appear much better than placebo, despite it being commonly recommended. In fact, this was the case for most of the supplements the researchers assessed.

There is now a vast body of research examining the efficacy of nutrient supplementation in people with mental disorders, with some nutrients now having demonstrated efficacy under specific conditions, and others with increasingly indicated potential. There is a great need to determine the mechanisms involved, along with examining the effects in specific populations such as young people and those in early stages of illness. A targeted approach is clearly warranted, which may manifest as biomarker‐guided treatment, based on key nutrient levels, inflammatory markers, and pharmacogenomics.

Here in our West LA office, with our holistic, integrative focus and emphasis on regenerative medicine, we see supplementation as a key part of many treatment plans, whether for mental or physical health concerns. After all, nutrition – and making sure the body can use all the nutrients it gets – is often a major factor driving those concerns.

In such cases, supplements truly are an invaluable tool.