How Overdoing It with the Probiotics May Lead to Brain Fog 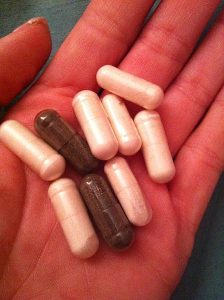 Prevention is good medicine, and for a lot of folks, that includes using things like dietary supplements and herbal remedies on a regular basis.

It may be something they read about on Facebook or saw on YouTube or heard in a podcast or simply stumbled upon through search. Since there’s usually little risk of immediate harm from taking such products, why not? If it works, fantastic! If it doesn’t, no big loss, right?

But unless you’re doing this with a doctor’s guidance, there can be risks over the longer term.

For instance, there can be bad interactions between supplements – or, more often, supplements and prescription drugs – that you may not be aware of. Maybe you don’t take enough to get the effect you desire. Maybe you take too much. Maybe there are side effects that you don’t attribute to the supplements because “everybody knows” that they’re harmless.

Consider probiotics – super popular right now as research into the microbiome continues to suggest the importance of gut health on overall health. Probiotic supplements – including those added to various foods – are intended to add more helpful bacteria to the GI tract, supporting good immune, digestive and brain health in particular.

They also play a role in a recent study in Clinical and Translational Gastroenterology.

For this small but intriguing study, patients with gas, bloating, intact gut, and negative endoscopic and radiological tests were evaluated. Thirty patients also had brain fog, while 8 did not.

The researchers tested for bacterial overgrowth in the small intestine. They ran metabolic tests and measured urinary levels of D-lactic acid and L-lactic acid and ammonia levels in the blood. Bowel symptoms and how food moved through the GI tract were also assessed.

The team found that patients with brain fog tended to have large numbers of bacteria colonizing their small intestine. Their levels of D-lactic acid were especially high – a result of bacterial fermentation of sugars in the food they ate.

The brain fog patients all had one thing in common: They took probiotics, which may have contributed to bacterial overgrowth and a surge in D-lactic acid levels. This is significant, as D-lactic acid is temporarily toxic to brain cells. It can interfere with your ability to think.

In the study, the researchers found some patients had two to three times the normal amount of D-lactic acid in their blood, leading to bouts of brain fogginess that could last for hours after eating, and in some cases were so severe that patients had to quit their jobs.

Sometimes, the effects could be rapid, with the researchers finding one patient who experienced brain fogginess and bloating within a minute of eating.

Of course, not all people would experience the same symptoms from taking probiotics, and not all probiotics are the same either.

But Rao says the experience of the patients he and his team clinically observed over three years shows nobody should casually or indiscriminately be taking probiotics without taking medical advice.

“Probiotics should be treated as a drug,” he says, “not as a food supplement.”

The good news? When patients stopped taking the probiotics and took a course of antibiotics to tame the bacterial overgrowth, the brain fog went away. Seventy percent reported significant improvement in all their symptoms, and 85% reported that their brain fog had dissipated.

None of this should be taken to mean that probiotics are dangerous or should be avoided. They can be hugely helpful if the right kind are taken in the right dose.

The best way to make sure you use probiotics in a way that’s helpful to you – your gut, your immune system, your brain, the works – is simply to work with an integrative physician who can offer guidance and steer you toward the results you seek.