If you’re an Angeleño, you’re no stranger to ozone. Our air can get pretty thick with this greenhouse gas – even more so through recent months as the Porter Ranch gas leak went on and on and on. (Methane and ethane both increase ground level smog ozone.)

So it’s easy for us to think of ozone as something terrible. But it can also be protective, as in the ozone layer, which absorbs ultraviolet radiation from the sun. And here on Earth? When properly harnessed, ozone is, in fact, a powerful and safe disinfectant.

Ozone has been used medically since the late 1800s and increasingly through the 20th century. Widely used among European physicians, it’s only been in recent years that ozone has come to be used more widely here in the States.

And now we’re pleased to offer ozone therapy here in our own office.

What Are We Talking About When We Talk About Ozone?

The stuff you breathe is a molecule made of two atoms of oxygen. An ozone molecule contains three oxygen atoms. That third atom makes it unstable. The molecule really wants to lose that extra atom. That instability is precisely what gives it its antimicrobial power.

This diagram from the office of Canadian integrative physician Dr. Paul Jaconello tells the tale nicely: 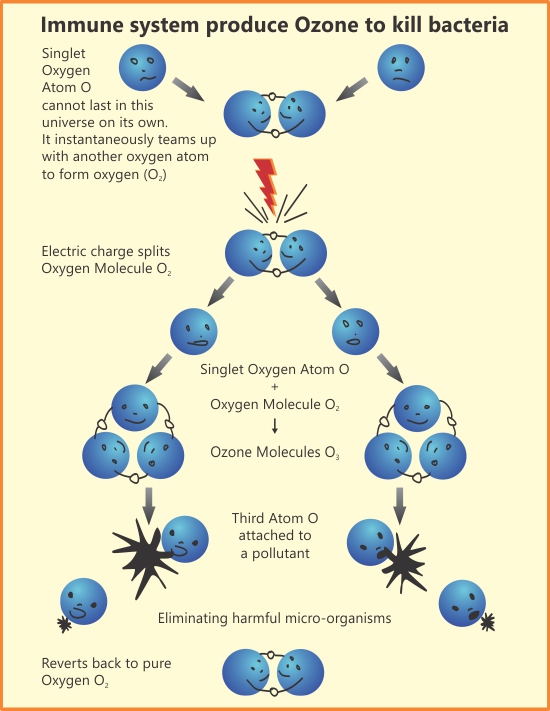 Ozone has proven extremely effective against bacteria, viruses, fungi, and parasites of all sorts. Dr. Sarah Carnes of the Sophia Health Institute notes the particular success doctors have seen with ozone therapy for chronic infections such as Lyme. During the 2014 Ebola crisis in West Africa, Drs. Robert Rowen and Howard Robins showed an incredibly high success rate when treating victims with ozone.

Dr. Frank Shallenberger – the physician credited with “reintroducing” medical ozone to modern American physicians – notes that there are five main properties that account for its healing ability:

There are several ways in which medical grade ozone can be administered, including IV, sauna, topical oils, water, and insufflation (filling a body cavity). It also has uses in dentistry, treating all kinds of infections from caries (decay) to gum disease to cavitations. Ozonated oils may be used externally to support the healing of burns and wounds – or on the gums to support their health.

Ozone therapy is a valuable support to other practices – including antibiotic therapy where appropriate. And that’s exactly why we’re so pleased to be offering it now in our clinic, giving us yet another tool to help our patients on their healing journey toward Radiant Health!