Arthroscopic surgery is big business. How big, you ask? Each year, we spend more than $3 billion dollars for knee surgery alone.

And according to guidelines just published in the BMJ, much of that may be a waste. As NPR reported,

The guidelines…reviewed 13 studies involving nearly 1,700 patients and found the surgery did not provide lasting pain relief or improve function for most of them. Those studies compared the surgery with a variety of options, including physical therapy, exercise and even placebo surgery.

Fewer than 15 percent of patients felt an improvement in pain and function three months after the procedure, and that those effects disappeared after one year, the review found. In addition, the surgery exposed patients to “rare but important harms,” such as infection.

Fortunately, arthroscopic surgery is hardly the only option, whether the pain comes from injury or the long-term effects of arthritis.

We’ve talked before about prolozone therapy as an option for long-term pain relief, supporting the healing of wounded tissues. Research supports this.

For instance, one randomized clinical trial in Anesthesiology and Pain Medicine found that prolozone therapy reduced pain and improves knee function, on par with one of the treatments it was originally developed from, prolotherapy. 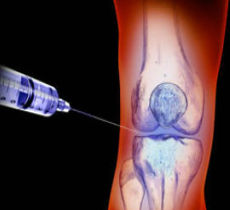 In prolotherapy, the doctor injects the pain site with a sugar solution, lidocaine, and vitamin B12. The idea is to trigger an inflammatory response and the healing it generates.

With prolozone therapy, we add ozone, homeopathics, and vitamins to the mix. (Prolozone also uses procaine instead of lidocaine.)

The ozone is key. That super-charged oxygen stimulates cellular growth factors and the regeneration of new, healthy tissue. In the words of ozone expert Dr. Robert Rowen, without oxygen, “cells simply cannot repair.”

Research presented at the 2015 Annual Meeting of the American College of Rheumatology found ozone alone may be helpful in treating of knee osteoarthritis. For the study, 98 seniors were randomly split into two groups. One got weekly injections of ozone gas over 8 weeks; the other got sham injections.

At 16 weeks, pain, function, overall health, and quality of life were significantly better in the ozone group than in the control group.

Differences emerged in the first week for some tests and by the fourth week for most tests.

Other studies – such as this, published last fall in the Middle East Journal of Rehabilitation and Health – have had similar results. As one paper summed up,

There is a long time evidence (four decades of clinical use) of the use of Ozone on many diseases and especially on treating musculoskeletal disorders such as knee OA. Ozone is able to inhibit inflammatory cytokines, MMP (mineral metalloproteinases), NO (nitric oxide), PGs and to stimulate anti-inflammatory cytokines, growing factors, chondrocytes and stem cells. Ozone diminishes inflammation and favours the trophism, vascularisation and repair of articular cartilage and subchondral bone. The action of Ozone over different targets on knee OA postulates it as a promising and wonderful therapeutic weapon capable to diminish pain, articular destruction and recover function and quality of life.

And what can you expect as a patient? Dr. Frank Shallenberger, who developed the therapy, describes it well in an overview published in the Journal of Prolotherapy:

The first thing that most patients notice after a Prolozone treatment is an almost immediate 50-80% decrease in pain. This is in part due to the effect of the procaine. But ozone itself has a significant ability to directly relieve pain. A 2009 article published in the European Journal of Pharmacology demonstrated that a single subcutaneous injection of ozone prevents allodynia and decreases the over-expression of pro-inflammatory caspases in the orbito-frontal cortex of neuropathic mice, immediately eliminating any signs of pain. Lamberto Re, a medical doctor and soccer team physician in Verona, Italy routinely injects the acutely injured areas of his players with ozone alone. He does not use procaine. And he reports a marked decrease in pain as well as an improved rate of healing.

Be sure to check out his article for some eye-opening case histories that further illustrate the power of this therapy.