Falling Back: The Time Change & Your Body

Is there any American who won’t be saying, “Hallelujah! I get an extra hour of sleep!” when they turn in this coming Saturday night? 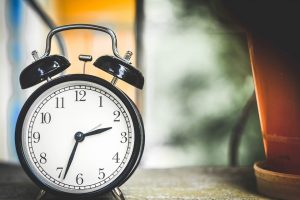 Let’s face it: Most folks see the end of Daylight Saving Time as a very good thing – and it’s onset, a very bad thing. As if losing that hour of sleep weren’t enough to make you a little bit cranky, each spring, there are countless media stories about how DST may be “bad for your health.”

But you hardly hear anything about how the change back to Standard Time affects us – and affect us, it does. Any change does. Just as you constantly making steering adjustments so your car maintains a steady path on the road, so your body is constantly makes adjustments on its path through life, as well.

The biggest change, of course, is the disruption of your body’s internal clock, or circadian rhythm. According to one study in Sleep Medicine Review,

The autumn transition is often popularised as a gain of 1 h of sleep but there is little evidence of extra sleep on that night. The cumulative effect of five consecutive days of earlier rise times following the autumn change again suggests a net loss of sleep across the week.

This cumulative sleep loss, in turn, can stress out mind and body in a big way. Research on circadian rhythms has shown that “clock genes are active in almost every cell type in the body…. In effect, tiny clocks are ticking inside almost every cell type in our body, anticipating our daily needs.” When those clocks get out of sync, we really feel it. When they’re out of whack, we’re out of whack.

Another oft-noted concern is the onset of seasonal affective disorder as our days become shorter and darker. This was the focus of a study published earlier this year in Epidemiology, which analyzed data from more than 185,000 individuals who contacted hospitals in Denmark for help with episodes of depression.

This study shows that the transition from summer time to standard time was associated with an increase in the incidence rate of unipolar depressive episodes. Distress associated with the sudden advancement of sunset, marking the coming of a long period of short days, may explain this finding.

If continuing depression is an issue, work with a good counselor can be a blessing. An integrative physician may also be able to recommend non-pharmaceutical therapies that can be a support through this time.

But where sleep loss is the main issue, there are things you can do to make the transition easier, starting with simple acceptance of the fact that your body’s internal rhythms are going to be shaken up a bit, at least temporarily. For most of us, it takes some time to adjust.

One thing that can help is keeping to a regular sleep schedule as much as possible – going to bed and waking up at roughly the same times each day. Regular exercise – again, at a set time – can also be extremely helpful for getting your internal clocks in sync again.

Keep your mealtimes regular, as well, with no eating after 8pm. At that time, your body is starting to move toward the sleep side of the cycle. Eating late makes new demands on it when it should be moving toward rest.

Also helpful is to keep light-emitting devices like TVs, smartphones, and tablets out of your bedroom – or, at the very least, using blue light filters to reduce their effects. (Blue wavelengths tend to make you alert – the last thing you need as you’re trying to wind down.)