The Latest Discovery in Lyme Research

Lyme disease has been around for thousands of years. In fact, the oldest evidence for it was found in a 5300-year old ice mummy, which contained traces of the bacterium that causes Lyme. 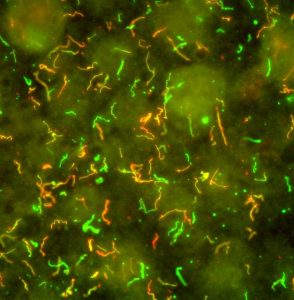 So would you believe that it’s only been recognized in the US for roughly half a century? And that the connection between that bacterium and Lyme wasn’t even identified until 1981? It was a discovery that the medical community honored by naming it after the scientist who identified that link, Willy Burgdorfer: Borrelia burgdorferi, or B. burgorferi for short.

In the years since, our knowledge about Lyme – including post-treatment Lyme disease syndrome (PTLDS), or chronic Lyme – has expanded immensely. So have the number of cases, even here on the West Coast. It’s no longer something that just happens to folks back east.

But for all that we do know, new discoveries continue to be made – such as the one recently documented in a paper recently published in PLOS Pathogens.

Like most bacteria, B. burgdorferi makes a mesh-like bag called a peptidoglycan to protect the inner workings of its cells. Previous research has shown that this bag can hang around in the bodies of Lyme patients for a long time, causing pain and inflammation long after the initial infection.

The same lab responsible for that discovery has now found a protein associated with B. burgdorferi’s peptidoglycan – NapA, or Neutrophil Attracting Protein A – which acts like “a molecular beacon” that stimulates the immune response and ramps up inflammation.

“NapA is another piece to an ever-evolving puzzle; it seems to play a basic role in everyday bacterial life by helping the overall protective properties of peptidoglycan, but it moonlights as a devious protein capable of tricking our immune system,” said [study co-author Brandon] Jutras, an affiliated faculty of the Fralin Life Sciences Institute and the Center for Emerging, Zoonotic, and Arthropod-Borne Pathogens.

“We believe NapA’s devious side has two modes: Early in infection, when bacteria are dying and releasing NapA and peptidoglycan, it acts as a decoy to attract immune cells, which allows the viable bacteria to escape and cause disease. In later stages of disease, it may act to attract immune cells to peptidoglycan, a molecule capable of causing inflammation and arthritis,” Jutras said.

While it’s obviously far too soon to talk about specific ways in which this knowledge may be applied toward future treatments, it’s clearly to our benefit to keep growing our understanding of how B. burgdorferi does what it does. That’s how our therapies consistently evolve and improve. Understanding the nature of a problem is key to its solving.