What does healing from Lyme disease look like? Here’s how it looked for entertainer Debbie Gibson this past spring in Chile:

All of us here in the office were honored to be a part of her process and elated to see her amazing recovery from the struggle she describes with candor and detail on her blog.

She had been grappling with the illness for over a year, symptoms intensifying and growing ever more baffling as she went from doctor to doctor to doctor with no sign of relief. Unfortunately, this is a common experience for those who develop chronic Lyme. It’s a notoriously difficult condition to diagnose with conventional testing. “And,” as Dr. Mercola notes, “there’s great variation in the presentation of the disease as well, depending on where you contracted it, and whether or not you have any other coexisting infections.” Moreover,

With Lyme, the most disabling symptoms are always invisible. You never feel completely well, there is always some issue to deal with, and as soon as one symptom retreats, another appears. The dial is spinning all the time. The constant and sometimes disabling symptoms leave you physically depleted and spiritually weakened…

Because Lyme and all of its co-infections cause so many constant symptoms, it easily mimics disorders, such as multiple sclerosis (MS), arthritis, Parkinson’s, chronic fatigue syndrome, fibromyalgia, ALS, ADHD and Alzheimer’s disease.

It certainly lives up to the moniker some have given it: The Great Pretender. It may bring with it “classic” Lyme symptoms like the bulls-eye rash – or it may not. It may have autoimmune effects – or not. It may manifest neurological symptoms – or not. As with any chronic illness, a wide variety of factors influence its expression, from nutritional status to toxic load to immune health; from the particular type of infection to constitution to overall health status.

The key is proper testing – blood- and serum-based, sometimes using antibiotic challenge testing – to help ferret out what the condition is and is not, followed by proper comprehensive treatment. That treatment, as Debbie explains in her post, involves far more than mere antibiotics.

I remember sitting in his office, despondent. “I am in here somewhere,” I said through tears. By this point, my cognitive thinking had been affected… my sense of direction, sleep, moods, stamina, muscles and joints. And, I had this sunken in look and dark circles under my eyes. All the times you saw me on Vine, Twitter, Facebook, Instagram or YouTube laughing and singing, I used concealer to cover that up and pulled from my reserves to bring you my best.

The doc and his staff gave me Vitamin IV drips, daily. I lived in that office. Dr. Joe performed acupuncture on me, himself, to help alleviate the back pain. I told a select group of people what I was going through. They showed tremendous support.

I went on an intense regime of antibiotics and other medications to wipe out the Lyme. Ironically, it was wiping ME out as well!!!! It was as if I had a personality transplant. There was a plateau moment were the meds were helping. The regime definitely got me over a major hurdle. I sat at the piano for hours… something I had been unable to do for quite some time. Certain cognitive symptoms were getting better. The nerve tremors, which were like somebody running an electric current through my nerves shaking me awake from the inside out, were a thing of the past. 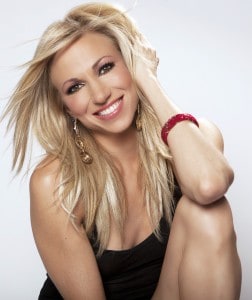 And the improvement has only continued as she continues to care for herself and receive additional medical support as needed. For despite what you may have heard or read about chronic Lyme – also known as Post-Treatment Lyme Syndrome (PTLS) – it’s not necessarily a forever thing, some enigmatic illness that can only be “managed” for the rest of your lifetime. With proper therapy and critical improvements in lifestyle choices, the development of healthier habits, health after healing endures.

We are so proud of Debbie and all the excellent work she’s done to stimulate and nurture her body’s inherent healing abilities, and we – like so many others around the world – look forward to what her restored health and vitality allow her to accomplish as she continues to thrive as an entertainer and artist for the many years to come.

For more testimonials about the work we do in our clinic here in Los Angeles, check out the videos here.