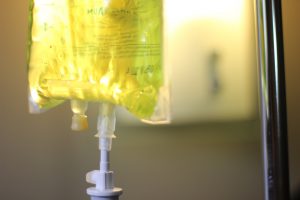 There’s yet another study we can add to those we blogged about earlier this year, research showing how IV vitamin C can deliver big benefits in a variety of health situations.

A new study in Chest provides good evidence that an IV cocktail of vitamin C, thiamine (vitamin B1), and hydrocortisone may be extraordinarily effective for treating sepsis – a deadly condition that occurs when the body’s response to an infection damages its own organs.

The study compared the clinical outcomes of 47 septic patients treated with this cocktail during a 7-month period with those of 47 septic ICU patients treated conventionally before the study began. Did the patients live? That was the main outcome the authors were concerned with. After all, sepsis kills up to 50% of the time. As the NIH notes, deaths from sepsis outnumber deaths from prostate cancer, breast cancer, and AIDS combined.

In the current study, just over 40% of patients in the control group died – vs. 8.5% in the vitamin C group, none of them from the sepsis itself but their underlying diseases.

As NPR reported, of the approximately 150 septic patients treated thus far by the lead author – Dr. Paul Marik of Eastern Virginia School of Medicine – only one has died of sepsis.

That’s a phenomenal claim, considering that of the million Americans a year who get sepsis, about 300,000 die.

Dr. Marik is now conducting and NIH-funded study of the treatment, controlled, double-blinded, and occurring at several universities. Suffice it to say, we look forward to seeing the results.

Of course, those of us for whom IV C is no novelty aren’t quite as surprised by these results as the mainstream media has seemed to be. We’ve known, for instance, that delivered intravenously – which lets the body absorb far more of the nutrient than it could if the vitamin were taken orally – vitamin C can have a profound effect on the immune system and inflammatory markers.

In fact, some of the earliest documented uses of IV C were for the treatment of infection. As the Riordan Clinic points out, from the 1930s to the 1970s, physicians successfully treated a wide variety of viral infections with high dose vitamin C: polio, diphtheria, herpes zoster, herpes simplex, chicken pox, influenza, measles, mumps, and viral pneumonia, among others.

Dr. Klenner published all studies of a variety of diseases successfully treated through massive injections of vitamin C and suggested that that due to effectiveness of injectable vitamin C, this vitamin can be considered as a super antibiotic.

Today, high dose IV C to treat infections of all sorts is the most common use by integrative physicians. According to a 2010 study in PLoS ONE, nearly half of uses for high dose IV C were precisely for that: treating infection. Importantly, the authors note in their conclusions that “high dose intravenous vitamin C appears to be remarkably safe.” Out of more than 9300 patients they had data for, only about 1% (101 patients) experienced any kind of side effects at all, and most were minor.

The safety and efficacy of high dose IV vitamin C is precisely why holistic, integrative medical clinics like ours continue to provide this valuable therapy among other drip therapies available to our patients, both those who are seeking healing, as well as those who want to take their already good health to the next level, to transform it into Radiant Health.