One thing that Omicron taught us was that COVID vaccines are helpful in limiting hospitalizations and deaths due to SARS-CoV-2. Emerging research now suggests that they may reduce the risk of long COVID, as well.

One Israeli study – not yet peer-reviewed – analyzed data from over 3300 people who received PCR tests between March 2020 and November 2021. Those who were infected – about one-third of the total – were asked to report on possible long COVID symptoms several months after their initial infection. As NPR reported,

Participants who had two or three doses of the vaccines were about 50% to 80% less likely to report seven of the 10 most common symptoms, which include shortness of breath, headache, weakness and muscle pain.

Similarly, a US study of patient records found that patients who were at least partially vaccinated “were seven to 10 times less likely to report two or more long COVID symptoms compared to unvaccinated people between 12 and 20 weeks after their infection.”

There’s overwhelming evidence that someone who’s vaccinated has less virus in their body during an infection, he says, “so it would make great sense that the amount of virus-related complications over time would also be lower.”

Meantime, after a good deal of research on vitamin C’s potential role in treating COVID (some of which we blogged about here and here and here), scientists have also begun looking into its potential for addressing symptoms of long COVID. 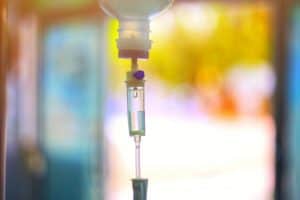 One of the most recent published studies looked at the impact of high dose vitamin C on fatigue following all manner of viral infections but particularly SARS-CoV-2, since extreme fatigue is one of the most common symptoms among long haulers. To do so, its authors identified 9 relevant clinical studies involving over 700 participants. They found that

Three of the four controlled trials observed a significant decrease in fatigue scores in the vitamin C group compared to the control group. Four of the five observational or before-and-after studies observed a significant reduction in pre–post levels of fatigue. Attendant symptoms of fatigue such as sleep disturbances, lack of concentration, depression, and pain were also frequently alleviated.

Noting the nutrient’s “antioxidant, anti-inflammatory, endothelial-restoring, and immunomodulatory effects, the authors concluded that “high-dose IV vitamin C might be a suitable treatment option.”

Indeed, we’ve seen that controlling inflammation is an important part of bringing relief to long haulers, often through a combination of both drip therapy and oral supplements designed for anti-inflammatory and neurological support. Also important is identifying and addressing any co-infections or other underlying conditions that may be fueling the ongoing health issues.

Always, the goal is to treat the individual and address root causes, not just symptoms.