More than fifty years ago, a study suggested that cancer was a “disease of changes in connective tissue caused by a lack of vitamin C.” And in the 1970s, it was thought that high doses of ascorbic acid – one form of vitamin C – could could help build resistance to disease, infection and maybe even treat cancer.

And chances are that today, when you feel like you’re coming down with a cold or flu, the first thing you think of doing is upping your intake of vitamin C.

That impulse comes courtesy of the Nobel Prize-winning chemist and “Godfather of Vitamin C” Linus Pauling, who began studying the efficacy of Vitamin C against infections in the late 1960’s. A few years later, a Scottish surgeon named Ewan Cameron began working with Pauling to study the possible benefits of C therapy in clinical trials of cancer patients.

Those studies used high oral doses of vitamin C, and claimed a mild success. But ascorbic acid can be hard on the stomach, and most of it gets excreted before ever reaching the bloodstream anyway, so it wasn’t all that effective against cancer. Establishment medicine declared “case closed” and still barely takes idea seriously. 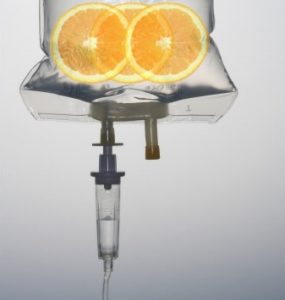 But it was only a matter of time before someone would consider what would happen if you administered C intravenously, injecting directly into the cancer sites.

Vitamin C is thought to annoy cancer cells by initiating a chemical reaction that makes hydrogen peroxide, which is very similar to what white bloods cells do to fight infection. It’s also part of a group of phytochemicals called antioxidants, which are molecules that can safely “lend electrons” to damaged or oxidized cells such as you would find in an infection (like a cold or flu) – or cancer.

Over the years, many laboratory studies have investigated high-dose intravenous C as an adjunct to traditional cancer treatment. All together, they have shown it to effectively slow the growth and spread of many types of cancer cells, including those of the prostate, pancreas, liver and colon.

Subjects in human trials using IV vitamin C as an adjunct to breast cancer treatment reported a higher quality of life than those who did not. One possibility is that the antioxidant nature of vitamin C protects the brain, muscles, and heart from the damage being done by chemotherapy. Recent research has shown a lower risk of death following breast cancer diagnosis in patients receiving intravenous C.

Vitamin C has also been thought to be beneficial for those with terminal cancers, again, improving overall quality of life, increasing appetite, and reducing nausea and pain.

Another recent study has shown that using intravenous vitamin C combined with certain chemotherapy drugs actually enhanced the potency of the drugs and killed cancer cells more effectively than the chemicals or radiation alone!

One of that study’s authors – Dr. Jeanne Drisko, director of integrative medicine at the University of Kansas Medical Center – sums up the state of the knowledge nicely:

It’s safe. It’s inexpensive. There’s a plausible mechanism we’re investigating for why it works. We should be using this in patients, rather than dragging our feet and worrying about using it at all.