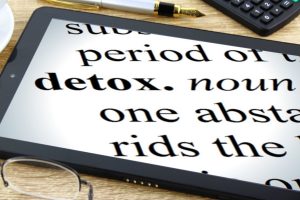 We’ve talked before about the importance of regular detox. Sure, your body is fully capable of removing toxins on its own, but most of us are routinely bombarded with so many different pollutants in such great quantities, the body can get overburdened.

Think of a sieve. Liquid passes through a sieve easily – unless it’s overfilled (made to do too much) or its holes get clogged (has done too much). It doesn’t work so well then. Likewise, the overburdened body.

In that case, we have to help it along, support its ability to do the work it was designed to do. This is why regular detox is a good idea for most all of us – to counteract the overload of pollutants our bodies are now charged with excreting.

That help can come in the form of daily habits that help support the body’s detox abilities or more intensive periodic cleanses. And in the case of the latter, it’s important to remember that not all “cleanses” are equal, let alone sensible.

Consider the case of the life-threatening “New Year’s ‘detox’” that made the news last week – which came via a paper published last fall in BMJ Case Reports. According to the press release,

[A] previously fit and well 47-year-old woman had been consuming more fluids and herbal medicines than usual, including valerian root, over the New Year period.

She was admitted to hospital following a brief period of confusion and repetitive behaviour, such as teeth grinding, which lasted for an hour. She then collapsed and suffered a seizure.

Her family revealed that she had increased thirst over the past few days and had been drinking more water and tea as a result, but they did not note this to be excessive.

The patient reported that she had more recently been under increased stress and suffering with low mood and had been increasingly taking them all together.

Abnormally low sodium in her blood caused the seizures, but what caused the low sodium (hypnatraemia)? According to the doctors who treated her, her fluid intake wasn’t excessive enough to do it. Rather, based on one previous case, they speculate that the valerian root – an herbal remedy commonly used for its calming effects – may have lowered the threshold for hyponatraemia.

While that’s just a hypothesis at this point, it does highlight the fact that herbal medicines and supplements can have unexpected interactions and effects. They’re safe, yes. (In fact, according to the latest data from the US National Poison Data System, in 2015, there were no deaths from supplements, homeopathics, or herbs. By contrast, more than 33,000 Americans died last year from opioids alone.) But they’re not innocuous.

This is a big reason why significant supplementation should always be done under the guidance of a knowledgeable physician or other integrative health care professional. And the same goes for detox.

By consulting with a holistic health care drip therapy professional, you can make sure that whatever detox you do is safe and will support your body’s nutritional needs as well as its detoxing abilities. You can get a plan that meets your individual needs and supports your whole health. You can move forward on the path to Radiant Health.