Back in December 2018, we shared a guest post on root canals and chronic illness by long-time biological dentist Dr. Gary Verigin. Since then, it’s been accessed more than 31,500 times, accounting for nearly one-quarter of all page views on our site!

And pretty much every day now, we receive at least one message from someone concerned about root canal teeth in their own mouth: Do you think that might be why I’m experiencing these symptoms? If I get them taken out, will I get better?

Often, we have to explain that this is a medical clinic – but one that, over the years, has worked closely with holistic and biological dentists who have patients needing medical support. When oral conditions – such as infected root canals – prove to be contributing to a patient’s health problems, it’s seldom enough to just remove that factor (e.g., extract the tooth). Detox is called for – for when the body becomes burdened in that way, it becomes less able to clear toxins on its own.

While some biological dentists pursue additional education and training so they can provide detox support directly, others prefer to stay focused on the dentistry and refer their patients to integrative physicians like Dr. Joe – or to naturopaths, doctors of functional medicine, or other knowledgeable practitioners. 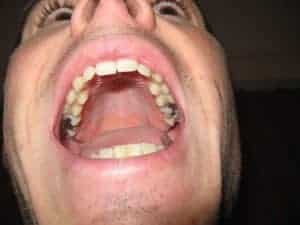 Though often called “silver” fillings, these restorations are actually about 50% mercury – one of the most toxic natural elements on Earth. It’s especially harmful when inhaled. And it’s routinely inhaled, as mercury is outgassed from the fillings with every bite and swallow.

Some of this mercury is excreted. Some of it migrates to vital organs such as the kidneys and brain.

A wide range of health problems are believed to be caused or worsened by dental mercury, including MS, Alzheimer’s, Parkinson’s, kidney disease, psychological problems, heart problems, and more.

Just recently, the FDA finally issued new guidance against using mercury in children, pregnant and nursing mothers, women who plan on pregnancy, people with pre-existing neurological or kidney problems, and people who have heightened sensitivity to any of the metals in amalgam (typically silver, tin, and copper).

The IAOMT and DAMS are two great sources for learning more about mercury amalgam. Also be sure to check out the documentary Evidence of Harm.

For an overview of how root canal teeth can become a problem, we refer you back to our earlier guest post.

However, you should be aware that there are some holistic and biological dentists who will still occasionally do root canals, typically using ozone for better disinfection of the tooth. And even dentists who generally oppose root canal treatment often note that it can sometimes be “the least worst option” for dealing with a badly infected or damaged tooth.

In that case, nutritional, homeopathic, or other supports can be used to help keep the body resilient and help reduce the risk of resurgent infection.

To learn even more about the potential impact of root canal teeth on health, check out Dr. Dawn Ewing’s presentation “Oral Obstacles to Optimal Health,” as well as the documentary Rooted. You may also want to read Dr. George Meinig’s Root Canal Cover-Up and Dr. Ron Carlson’s Death by Root Canal. 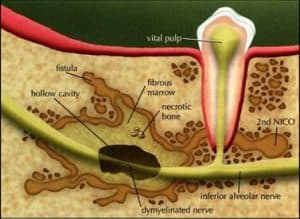 The proper term for this condition is chronic ischemic bone disease or cavitational osteonecrosis, both of which refer to “hidden” infections in the jaw. Often, these occur at old surgical sites that weren’t cleaned and disinfected thoroughly. Healthy-looking new tissue on the top covers dead and decaying bone, where pathogens generate toxic metabolic waste.

Sometimes, they can cause pain in the jaw, face, and mouth, but they can also go undetected for a long, long time. They’re hard to identify on standard x-rays. A CBCT scan may be more telling, along with energetic testing such as EAV or meridian stress assessment.

Like amalgams and root canals, cavitations have been linked to an array of health problems, including autoimmune disorders such as lupus, rheumatoid arthritis, cardiovascular issues, and cancer.

Dr. Verigin has an excellent article on cavitations we encourage you to read, along with Suzin Stockton’s Beyond Amalgam. Or watch her comprehensive presentation on cavitations here.

If you have concerns about any of these dental situations, we urge you to consult with a biological dentist for answers. All three of the main professional associations for such dentists here in North America have searchable directories to help get you started: