Root Canal Teeth & Chronic Illness: Is There a Connection?

As an integrative medical clinic, we’ve worked closely over the years with biological dentists whose patients need detox or other medical support as part of their care. Our thanks to the office of biological dentist Gary Verigin for providing this article on a dental situation that can require such collaboration.

Over the years, root canal teeth have been associated with a host of chronic, systemic health problems, including autoimmune disorders, musculoskeletal diseases, gastrointestinal disorders, fibromyalgia and other enigmatic illnesses, and cancer. 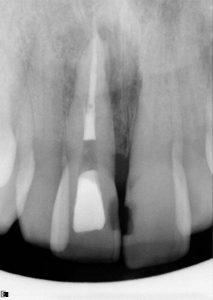 In fact, in Cancer: A Second Opinion, German physician Dr. Josef Issels noted that nearly all of the patients he saw in his cancer clinic had infections lingering in “successful” root canal teeth. Each root canal tooth, he said, should be considered “a dangerous toxin producing ‘factory,’”

For the study, researchers collected data from both healthy patients and those who were chronically ill. The latter included 7 patients with cancer, 32 with chronic fatigue and systemic immunological exhaustion, 19 with rheumatoid complaints, 9 with degenerative neurological disease, 18 with atypical facial pain and trigeminal neuralgia, and 12 with intestinal symptoms.

Dental x-rays were taken, and each set of images was examined for signs of apical periodontitis, or infection at the root tips which can develop into an abscess or cyst. The researchers also measured for toxic compounds that have been associated with root canal teeth.

Patients with chronic health problems were found to be three times more likely to have infected root canals than patients in good health. More than 40% “showed immunological disturbance as a result of root-filled teeth.”

Each Tooth Is a Living Organ 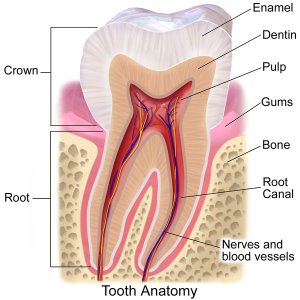 You might not realize it, but each of your teeth is a living organ – although if you’ve ever had a toothache or severe tooth injury, you know all too well how alive a tooth can be. If it weren’t alive, there would be no pain.

Of course, sometimes a toothache goes away. But that doesn’t mean the tooth has healed. It means the tooth is dead.

In that case – or when decay has gone deep or the tooth has been badly broken – a dentist might recommend root canal treatment to “save” the tooth. For some reason, this is deemed good medicine. Yet in no other case would a doctor leave a dead organ in an otherwise healthy body.

With teeth, it’s a different story.

How Root Canals Are Done & How They Can Spell Trouble

First, the dentist drills into the tooth and removes the nerves, blood vessels, and other tissues that make up the living pulp within. The dentist then disinfects the hollowed out tooth and packs it with a rubbery substance called gutta percha before placing a filling or crown on top.

The procedure is simple enough, yet it carries some significant consequences, largely due to the anatomy of the tooth.

Two layers of tissue protect a tooth’s pulp: the hard enamel that covers the outside of the tooth and, below that, the dentin. Though dentin looks solid, it’s actually made up of miles of microscopic tubules through which fluid flows – tubules that are impossible to disinfect completely.

Being dark, moist, hard to access, and lacking oxygen, they become a perfect harbor for harmful bacteria, fungi, and other pathogens.

Although some holistic dentists argue that ozone can do the job that standard disinfectants can’t, the results are only temporary. The infection springs back to action. Nor can lasers do the job since their light can’t bend along curves in a tooth’s roots or get into tiny offshoots from the roots.

So once a root canal tooth is filled and sealed, any remaining pathogens in the tooth are likewise sealed in and free to proliferate. And proliferate, they do.

But even more concerning is the metabolic waste that’s generated by those pathogens, including sulfur compounds such as mercaptans and thioethers. These highly toxic substances can damage mitochondria – the power plants of your cells – which are especially abundant in one of your body’s most important organs of elimination, your liver.

Toxins from the tooth are free to travel there – or anywhere else in the body – courtesy of the fact that while the tooth has been gutted and filled, it remains connected to the body at its roots. Toxins generated within the tooth thus enter the general circulation, free to wreak what havoc they will.

Through years of analyzing extracted root canal teeth, Dr. Boyd Haley has found that more than 90% of them are teeming with dozens of different pathogens.

Each tooth is also connected to the body energetically, via the meridian system. Each of the twelve meridians – energetic pathways – passes through a great many organs and tissues. Consequently, problems with a tooth may show up as problems with other organs that share the same meridian.

Of course, it’s one thing to read about these issues. It’s quite another to see an individual’s journey from good health to ill and back again.

To that end, you may want to check out the recent documentary Root Cause, which tells the story of one man whose health “went to s***” after root canal therapy was performed on a broken tooth. His story is interspersed with commentary from a wide range of experts who explain why root canals can be as damaging as they are.

The film is currently available for rental or purchase from the iTunes Store, Amazon, and Vimeo. We encourage you to check it out.

And if you’re concerned about the role that root canal teeth may or may not be having on your health, start by consulting a qualified biological dentist. The International Academy of Biological Dentistry and Medicine (IABDM) has a searchable online directory you can use to find such a dentist near you: findabiologicaldentist.com. Other good referral sources include the Holistic Dental Association (HDA) and the International Academy of Oral Medicine and Toxicology (IAOMT).