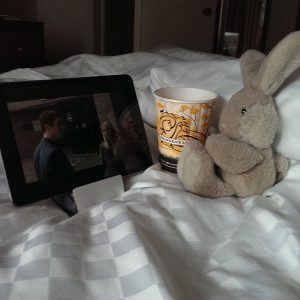 Who doesn’t like a good binge watch once in a while? To camp out in front of your TV or tablet, nosh, and watch to your heart’s content?

Only…if you do a lot of binge-watching, your heart may not be quite so content as you think it is.

Recently, a Japanese study in the journal Circulation took a look at the effects of binge-watching. The authors analyzed data from just over 86,000 adults – 36,000 men, 50,000 women – in their middle or later years. Participants were asked how much time, on average, they spent watching TV each day. Through 2009, data was collected on death by pulmonary embolism, a blockage of an artery in the lungs that usually starts with a blood clot that travels through the bloodstream from somewhere in the lower body.

Overall, the risk of this type of death rose 70% for those who watched 2.5 to 4.9 hours a day compared to those who watched less. More, the authors saw risk rise another 40% for every extra two hours of TV watching.

But despite the grabby headlines you may have seen elsewhere about this study, it’s not the binge-watching itself that may be hazardous to your health. It’s the sitting. And that’s been borne out by many other studies. As the authors of the binge-watching research note,

Our results are consistent with previous studies. In the Nurses’ Health Study, time spent sitting at home was linearly associated with an increased risk of incident pulmonary embolism among 99 290 nurses 44 to 69 years of age The participants in the highest category, who sat for ≥41 h/wk, had an increased risk of incident pulmonary embolism…compared with those in the lowest category, who spent <10 hours sitting per week. A meta-analysis of 14 studies (11 case-control studies, 2 cohort studies, and 1 case-crossover study) showed that long-distance travel is associated with an increased risk of incidence of or mortality from deep vein thrombosis or pulmonary embolism, with an 18% higher risk for each 2-hour increment in travel duration. [emphasis added]

Other recent research has provided even more evidence of what too much sitting can do on your cardiovascular health in particular. For instance, one study published earlier this year in the journal Menopause showed that, among Latin American women, the more sedentary the lifestyle, the more likely you are to have severe menopausal symptoms and to be obese.

Unfortunately, the average American adult tends to spend much of their day sitting – driving to work, working, kicked back in front of one screen or another during the evening, sitting down to meals. According to the Mayo Clinic, up to 70% of us spend 6 or more hours sitting every day. Other data suggests that we spend more than 9 hours a day, on average, in front of screens.

It’s fair to say that most of us here in the US would likely fall into the higher levels of sedentary behavior.

Sitting, as they say, truly is the new smoking. And just as quitting smoking is up to you, so is quitting sitting. You’re the one to move your body – to take frequent breaks to stand and walk about, to use a stand stool through your work day, to open time in your daily schedule for regular exercise, even if it’s something as simple as walking.

See our previous post for more tips on getting more movement into your day.