An Integrative Doctor Answers Some Common Questions About the COVID Vaccine 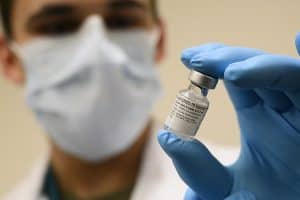 There’s a lot of good info out there about the various COVID vaccines. And a lot of misinformation. And no shortage of opinions across the spectrum.

Below, Dr. Joe answers some of the most commonly asked questions from his standpoint as a long-time practitioner of functional medicine. Have a question about the vaccines that’s not addressed below? Ask it in the comments!

How is the vaccine supposed to work?

Let’s start by pointing out one of the things the vaccines don’t do: None of the COVID vaccines will affect your DNA or your genes.

Both the Pfizer and Moderna vaccines contain messenger RNA (mRNA) created from the virus. The mRNA enters your cells and stimulates the production of a “spike” protein that mimics the virus “spike.” Your immune system recognizes this and activates immune killer cells and antibodies to destroy the real virus.

The mRNA can’t enter your DNA. It can’t enter the nuclei of your cells. Once your immune system has recognized the spike, the mRNA deteriorates. It can’t reproduce itself.

The Johnson & Johnson and AstraZeneca vaccines are slightly different, using modified or “attenuated” viruses designed to enter your cells. There, they release a modified DNA, which produces mRNA that works just like in the Pfizer and Moderna vaccines.

In no case does the vaccine change your DNA. It never even interacts with your DNA.

Does that mean the vaccine is safe?

Serious side effects such as severe allergic reactions are rare – roughly 2 to 6 serious reactions for every one million doses given, according to the CDC. This is only slightly higher than the rate of reactions to a flu shot and lower than the rate for other vaccines given in the US.

Milder side effects such as arm soreness, flu-like symptoms, fatigue, and fever last just a day or two and have no long-term effects that we know of.

How do we know the COVID vaccine is effective?

So far, testing has shown that the Pfizer and Moderna vaccines are 94 to 95% effective in preventing infection. This is a remarkably high level of protection. However, we don’t yet know if it’s protective against the new, more contagious mutation reported in the UK, Brazil, and South Africa.

While the Johnson & Johnson vaccine is less protective against the original COVID-19 virus, it has shown some protection against the newer strain.

That said, get whichever becomes available to you as soon as you are able to get the jab. The more people vaccinated, the less likely COVID-19 can spread and weaken our immune systems.

How many vaccines have been given?

As of February 4, 2021, more than 124 million doses have been administered globally. Over 27 million Americans have had their first dose. This is more than the number of COVID infections worldwide, although infection is still spreading rapidly in some parts of the globe.

But isn’t COVID-19 being hyped and really no more dangerous than the flu?
In a typical flu season, which goes until April or May, the CDC reports between 12,000 and 60,000 deaths.

I’ve heard that people have died from the vaccine. Is this true?

All reliable evidence to date shows that this is very unlikely.

There have been some deaths reported after vaccination, but careful analysis reveals a number of important factors:

I know that for some people, COVID can be really, really bad. But I also know that most people recover well. In light of that, is a vaccine really necessary?

A new study in Annals of the American Thoracic Society showed that most of those with even mild infections may have aftereffects 3 to 6 months later. Up to 75% of hospitalized COVID patients have long term effects 6 months later.

The Mayo Clinic reports that these “long haulers” experience one or more of the following: fatigue, problems with memory and focus, shortness of breath, headaches, joint and other pain, loss of smell or taste, and hair loss.

The vaccine’s greatest potential benefits aren’t just preventing deaths but preventing illness, which can have long term medical consequences for many of us.

I read that COVID rates are finally starting to fall significantly here in California, so do I really need to get the vaccine?

Rates have fallen as people have followed preventive measures like handwashing, masking, distancing, and avoiding social settings. We’ve seen infections surge where people have eased up on such practices. More, if we’re not vaccinated, we’re not protected if we contract the virus.

I strongly urge all my patients to get the vaccine unless there’s a medical reason against it, such as allergies to vaccine ingredients.

I’m healthy. I eat clean, detox regularly, and do all I can to keep my immune system strong. Isn’t that enough to protect me against COVID?

All these things are helpful. They may reduce the likelihood of experiencing serious symptoms if you get infected. You may not even show any symptoms at all.

But there is good evidence to suggest that even healthy and health-conscious people can get infected – and spread the infection to others. And as the Annals study mentioned above showed, there’s a risk of long-term symptoms even in milder cases of infection.

In your professional opinion, do you feel that the benefits of the vaccine outweigh its risks?

Have you received the vaccine? How did you come to your decision?

I’ve had my first dose of the Pfizer vaccine, and my second is scheduled for February 9.

I decided to get vaccinated after putting aside issues voiced by others based on personal opinions and conjecture – including some of my own initial misgivings. Once I dove deep into the science and the data we have to date – both for and against the vaccine – it seemed the right decision.

Am I concerned that dangers hidden now might emerge later and compromise my health? There are some concerns, yes. But these are dwarfed by my understanding of the science and the fact that this is a very dangerous virus, especially over the long haul.