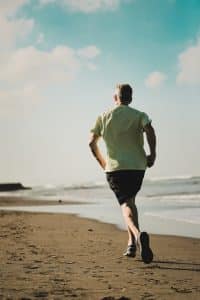 Exercise is for longevity and cognitive health alike. In fact, it’s so transformative, it’s one of Dr. Joe’s 8 Keys to Radiant Health.

And best of all is that it’s never too late to start, as two new studies remind.

The first, published earlier this year in Neurology, looked at the cognitive benefits of exercise in older adults with no memory problems. Just over 200 seniors – average age 66 – took part. None routinely exercised much before the study began. All had their thinking and memory tested at the outset, along with an ultrasound to measure blood flow in the brain.

For 6 months, they participated in a supervised aerobics program three times a week, gradually working up from an average 20 minute workout to at least 40 minutes. They were also asked to exercise on their own once a week.

By the end of the study, participants’ executive function – mental processes that involve things like focus, planning, and multitasking – had improved 5.7%. Verbal fluency was up 2.4% – a change, according to study author Marc J. Poulin, that “is what you’d expect to see in someone five years younger.”

Our study showed that six months’ worth of vigorous exercise may pump blood to regions of the brain that specifically improve your verbal skills as well as memory and mental sharpness. At a time when these results would be expected to be decreasing due to normal aging, to have these types of increases is exciting.

But what about in folks who already have memory issues?

That brings us to the second study, published this past May in the Journal of Alzheimer’s Disease, which looked at how an extended period of regular exercise might impact brain function in adults with established cognitive decline.

Thirty seniors with memory problems took part. Half took part in a year-long aerobic exercise training program. The other half just did stretching. Memory tests and brain imaging were used to measure changes over time.

By the end of that year, memory scores in the exercise group had improved 47%. Their brain imaging showed increased blood flow to areas of the brain that play key roles in memory function.

“We’ve shown that even when your memory starts to fade, you can still do something about it by adding aerobic exercise to your lifestyle,” [study author Binu] Thomas says.

Considering that dementia is an international epidemic, with economic costs of nearly $818 billion per year globally, the more we know how to prevent it or improve the health of those who’ve developed it, the better.