A Twist in the Tale of Long COVID?

A fascinating new JAMA study stirred up some controversy late last week by suggesting that psychological factors – rather than SARS-CoV-2 – may be behind some cases of long COVID. 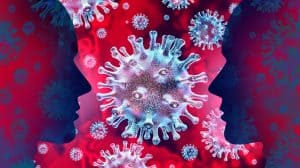 It involved nearly 27,000 French patients who took COVID antibody tests. After they received their results, they were asked whether they believed they’d been infected with SARS-CoV-2 and to report common long COVID symptoms such as fatigue, joint pain, breathing difficulties, and so on.

Those who reported symptoms were then asked if they attributed them to COVID.

Overall, those who believed they’d had COVID were more likely to report long-term symptoms – whether or not they had tested positive or negative.

The results of this cross-sectional analysis of a large, population-based French cohort suggest that physical symptoms persisting 10 to 12 months after the COVID-19 pandemic first wave may be associated more with the belief in having experienced COVID-19 infection than with actually being infected with the SARS-CoV-2 virus.

This was upsetting to more than a few people, from patients to medical professionals and public health officials. Some worry that the findings might stigmatize long haulers. Others worry that they could be used to argue that long COVID isn’t real. Those are legitimate concerns, to be sure. At the same time, they have less to do with the findings themselves and more with how others may respond to them.

The researchers also make some important points in their discussion about the possible mechanisms behind their findings:

First, having persistent physical symptoms may have led to the belief in having had COVID-19, especially in the context of a growing concern regarding long COVID. Although adjusting for self-rated health before the pandemic did not affect our results, another disease may underlie symptoms attributed to COVID-19 infection. Second, the belief in having had COVID-19 infection may have increased the likelihood of symptoms, either directly by affecting perception or indirectly by prompting maladaptive health behaviors, such as physical activity reduction or dietary exclusion. These mechanisms are thought to contribute to the long-described persistence of physical symptoms after acute infections.

In other words, it’s not that the patients were imagining symptoms. In some cases, they might result from changes in behavior due to their belief that they had COVID. In others, they might be misattributing them to COVID – or, as Dr. Joe has seen in his own practice, there may be co-infections or other problems also compromising a patient’s long-term health.

The findings also offer an illustration of another powerful and dramatic aspect of human health: the influence of mind, emotion, and spirit upon the body.