Zero-Calorie Sweeteners: “Doing Everything Else That Glucose Does” 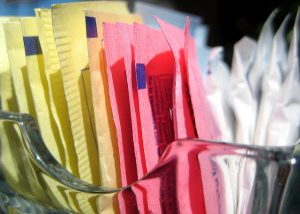 Though artificial sweeteners – aspartame, sucralose, Ace K, and the like – may contain zero calories, they do pack a punch of unintended consequences. We’ve looked at some of these before.

One of the oddest potential consequences? Weight gain, as well as health problems associated with overweight, such as metabolic syndrome and type 2 diabetes.

But if obesity is a simple matter of calories in, calories out, how could something with no calories possibly make you fat?

Well, we know that obesity isn’t quite that simple. Now, new research is shedding light on some possibilities.

One study, presented last week at the 2018 Experimental Biology meeting looked at biological changes when zero-calorie sweeteners are consumed. For it, the scientists used lab rats. Some ate a diet high in sugar; the other ate a diet high in artificial sweeteners. After three weeks, there were some notable differences in the concentration of biochemicals, fats, and amino acids in the rats’ blood.

The results suggest artificial sweeteners change how the body processes fat and gets its energy. In addition, they found acesulfame potassium [Ace K] seemed to accumulate in the blood, with higher concentrations having a more harmful effect on the cells that line blood vessels.

A recent human study, presented at the Endocrine Society’s meeting in March, was even more telling.

This small but compelling study included 18 participants. Some were normal weight but most were overweight or obese and often prediabetic. Each kept a food log for one week, after which fat biopsies were taken for analysis. Additionally, stem cells taken from their fat tissue were treated with various levels of sucralose – from the equivalent of drinking four diet sodas a day to five times that amount.

In other words, the metabolic effects observed were not so different from those triggered by sugar consumption. As senior study author Sabyasachi Sen told MedPage Today,

Here, you can listen to Dr. Sen talk more about his team’s findings.