White Bread Is Good for You?! What?! 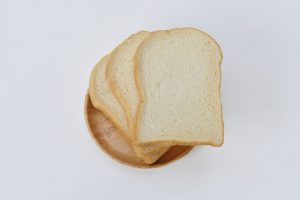 Did you catch the headlines last week declaring that “White Bread May Not Be Bad for You After All”? The hype around this study seemed a little reminiscent of last year’s “pasta won’t make you fat” study.

Just as back then, the spin is more than a little misleading.

For the study, researchers had 10 volunteers eat industrial white bread for a week and another 10 eat artisanal whole grain sourdough. For a second week, the groups switched breads. At the beginning of each week, the researchers evaluated each participant’s gut flora and measured variables such as blood sugar, cholesterol, triglycerides, and blood pressure.

They found that the type of bread had no significant impact on any of the factors they measured.

We demonstrate statistically significant interpersonal variability in the glycemic response to different bread types, suggesting that the lack of phenotypic difference between the bread types stems from a person-specific effect. We further show that the type of bread that induces the lower glycemic response in each person can be predicted based solely on microbiome data prior to the intervention.

This doesn’t say that white bread is a-ok, only that individuals seemed to respond to different bread in different ways.

This jibes with earlier research by two of the authors, which found that “even if we all ate the same meal, how it’s metabolized would differ from one person to another.”

Both studies point to the importance of personalized nutrition.

Some others have noted the real limitations of the new study, including it’s very small size, its short time frame, and its reliance on self-reported data. More, as Ed Yong points out in his coverage for the Atlantic,

A single study like this…cannot refute a large body of epidemiological evidence showing that people who eat more whole-grains tend to have lower risks of cancer, heart disease, type 2 diabetes, and other conditions. If you assume that these effects are causal, rather than just correlational, it may be that you need to eat a lot of whole grains, over long periods of time, to experience any benefits. Alternatively, large population-wide studies might mask the fact that only some people would benefit from these foods.

And beyond that, there’s more to a food’s healthfulness than glycemic response alone.

White bread is white because its flour is so heavily refined – a process which strips essential nutrients from the original grain. More processing is required to add back synthetic nutrients, not to mention all the synthetic chemical additives and preservatives used to create the desired texture and taste, as well as to help the product hold up during transport and have a long shelf life.

Notably, research suggests that food additives may contribute to an imbalance of gut flora, as well as obesity.

An artisanal whole grain sourdough has starter, whole grain flour, water, and salt – perhaps some oil or yeast. That’s it. The flour is higher in fiber and protein. It’s a better source of B vitamins and iron. Whole grains also contain other key nutrients such as selenium, potassium, and magnesium.

If you choose to eat wheat bread – and not all folks want to or can or even should – whole grain clearly remains the way to go, regardless of what the headlines say.