What Happens When You Replace Red Meat with Other Proteins? You Just Might Live Longer! 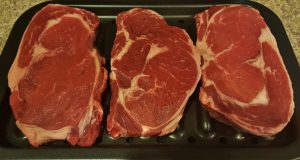 There are lots of reasons a person might choose to eat less red meat than the average American, from saving money to saving the environment; from concern for animals to cultural preferences and practices.

Science suggests another reason: Swapping out the red meat for other proteins just might help you live longer.

A study published last summer in the BMJ used data from over 80,000 participants in the Nurses’ Health Study and the Health Professionals Follow-up Study to examine the relationship between red meat consumption and mortality. All of the participants were free from cardiovascular disease and cancer.

And that association was direct and independent of any changes in lifestyle factors.

But check this out:

A decrease in total red meat consumption and a simultaneous increase in the consumption of nuts, fish, poultry without skin, dairy, eggs, whole grains, or vegetables over eight years was associated with a lower risk of death in the subsequent eight years. These findings suggest that a change in protein source or eating healthy plant based foods such as vegetables or whole grains can improve longevity. [emphasis added]

Of course, there are some folks who seem to think that if you just add more “healthy” foods to the mix, it can offset any effects of red meat. The research, though, doesn’t really appear to back this up.

One 2016 study, for instance, looked into whether fruit and vegetable consumption might modify the mortality risk of a diet high in red meat. Red meat consumption – especially processed meat – was consistently linked to a higher risk of dying from cancer or cardiovascular disease, regardless of how much fruit and veg a person ate.

You’d expect it to be otherwise. But while there are benefits to fruit and veg, too much meat can take a toll on the body. For instance, the heme iron content of meat might raise total iron levels too high, and

iron can act as a catalyst in the production of reactive oxygen species, which contribute to the development of several diseases, including CVD. [Fruit and vegetables, hereafter “FV”] contain nutrients and phytochemicals with antioxidant capabilities and could therefore be especially important for maintaining a favorable redox balance in the context of a high meat diet. Processed meat also contains high concentrations of sodium, which may contribute to a higher sodium:potassium ratio. The sodium:potassium ratio may be an important determinant of blood pressure, which is a major risk factor for CVD and stroke. FVs are important sources of potassium and may therefore attenuate the negative effects of a diet high in processed meat. Processed meat contains N-nitroso compounds, which have been shown to be carcinogenic in several animal species. Furthermore, meat consumption increases the endogenous production of N-nitroso compounds. Studies in rodents suggest that phytochemicals in FVs may inhibit the carcinogenic effects of N-nitroso compounds. Therefore, it is plausible that high FV consumption could protect against the increased risk of cancers associated with high meat consumption.

Rather, the most significant health benefits seem to come when foods like fruit and veg – or fowl, eggs, dairy, and so on – actually replace red meat. This was suggested by another study published last year in the journal Mortality. Analyzing 10 years of data from the Netherlands Cohort Study, involving over 120,000 older adults, researchers found that

Now, this can seem like terrible news if you enjoy red meat, but it can help to think of it not as a matter of restriction – “You can’t eat that!” – and more of an expansion of culinary possibilities, just replacing some of the red meat with fowl or fish, nuts, beans and other pulses, eggs, or dairy to ensure a healthy protein – and B12 – intake. (In fact, though a lot of people think that red meat is the best source of B12, fish such as salmon and trout actually contain far more.) 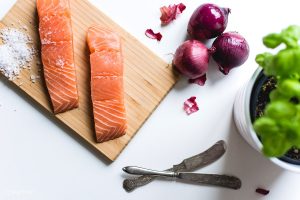 And you don’t need to abandon all red meat at once. If you’re a regular red meat eater, start by changing up one or two meals a week. As you eat a greater variety of proteins, you may actually find your tastes shifting away from red meat, where you find it naturally becoming less craveable, while fish, poultry, and other options become more appealing.

Sure, you might have to abandon that bacon lover’s t-shirt, but the one you replace it with is something you may be able to wear for a whole lot longer.