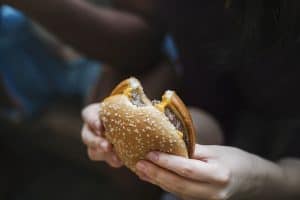 As we mentioned last time, one thing that’s really driven both pandemic weight gain and the ongoing obesity epidemic in general is the increasing consumption of ultraprocessed foods. Right on cue, a new paper on those foods came out in the American Journal of Clinical Nutrition.

For the study, researchers analyzed data from nearly 20 years of asking people to report what they ate over the previous 24 hours – data taken from 9 waves of the National Health & Nutrition Examination Survey (NHANES).

In 2001, 53.5% of calories came from ultraprocessed foods, such as frozen and ready-to-eat meals, salty and sugary snacks, fast food, soft drinks, and the like.

To put that another way, barely one-quarter of what Americans eat, on average, is whole, unprocessed food.

On the upside, we’re eating and drinking less sugar. And Hispanic adults actually decreased their consumption of ultra-processed foods. On the other hand,

That concerning reversal brings us to a new study in the journal Brain, Behavior, and Immunity.

The rats’ brain health was evaluated after 28 days to see the impact of diet on the brain. For the older rats, it was a one-two punch of memory impairment and brain inflammation. This wasn’t observed in the younger rats. Most crucially,

“The fact we’re seeing these effects so quickly is a little bit alarming,” said senior study author Ruth Barrientos, an investigator in The Ohio State University Institute for Behavioral Medicine Research and associate professor of psychiatry and behavioral health.

But here, too, there was a bit of good news to be found: Supplementation with DHA omega-3 fatty acids appeared to mitigate the damage to memory.

“These findings indicate that consumption of a processed diet can produce significant and abrupt memory deficits – and in the aging population, rapid memory decline has a greater likelihood of progressing into neurodegenerative diseases such as Alzheimer’s disease. By being aware of this, maybe we can limit processed foods in our diets and increase consumption of foods that are rich in the omega-3 fatty acid DHA to either prevent or slow that progression.”

Of course, DHA did nothing to counter the weight gain that was observed in all rats that ate the highly processed diet, not to mention that diet’s other documented negative effects on health and well-being.

But that one shift can be an important first step toward truly Radiant Health.