A Little Extra Spice Could Do a Whole Lot of Good 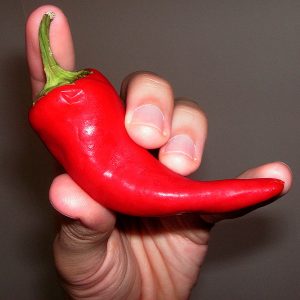 A study just published in PLoS ONE shows a link between eating hot chili peppers and longevity. Analyzing data from more than 16,000 adults in the NHANES III survey, the authors found that those who ate chilies had a 13% lower risk of all-cause mortality. The strongest connection came with heart disease, stroke, and other vascular conditions.

While the researchers are unable the pinpoint the precise mechanisms by which red chili peppers might extend lifespan, the team says that it is likely down to capsaicin, which activities transient receptor potential (TRP) channels.

Capsaicin is the stuff that gives peppers their heat. The hotter the pepper, the more capsaicin. (It’s also found in ginger root, but in very small amounts.) No heat – as in bell peppers – no capsaicin.

This “protection” is borne out by earlier research. One study published last summer in the British Journal of Pharmacology found that activation of TRPV1 actually triggered the browning of white adipose tissue, which, in turn, promotes fat burning. Similarly, a study in Nutrients found that “capsaicin and TRPV1 may be potential targets for the management of cardiometabolic vascular diseases and their related target organs dysfunction.”

Other studies have suggested that capsaicin may also inhibit the growth of breast cancer cells, reduce risk of colorectal cancer, and support cognitive function in older adults.

Pretty amazing, eh? Of course, as compelling as the early research is, much more is still needed.

It’s important to remember, too, that although food is indeed medicine, individual foods aren’t drugs. Eating a ton of chili peppers – or any other potential “superfood” – is hardly enough to offset an otherwise unhealthy lifestyle. Rather, such foods are to be embraced within an overall healthy diet – one low in sugar and hyper-processed carbs, rich in plant-based foods, healthy fats, and quality proteins.

That diet, in turn, is ideally situated within an overall healthy lifestyle – where you’re getting enough exercise, sleep, and rest; you’re managing stress; you’re keeping your hormones in balance; you’re supplementing as needed; you’re connected with others.

All these elements work together to create what Dr. Joe calls Radiant Health. It’s a recipe for long-term success. And each positive step you take reinforces all the others.

Looking for some ways of getting more spice into your diet? It can be as simple as seasoning your veg with cayenne or tossing some fresh sliced jalepenos or other hot peppers into a green salad. Or try your hand at any number of dishes from some terrific collections of recipes online.

A little extra spice could do a whole lot of good.