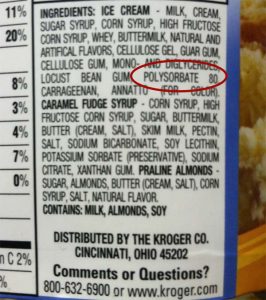 No sooner had we hit “publish” on our last post, we ran across a new study on another type of additive that may be contributing to modern health woes: emulsifiers.

Emulsifiers are used in a wide variety of hyperprocessed food products to change their texture, extend their shelf life, and keep ingredients from separating. You see them in baked goods, ice cream, salad dressings, chocolate, and processed meat, among other products.

Research has already suggested some serious drawbacks. For instance, a 2015 study in Nature found that emulsifiers may alter the balance of bacteria in the gut and contribute to chronic inflammation, raising the risk of obesity and metabolic syndrome.

But gut health also appears to affect the brain, as well. So researchers decided to look at the effect of emulsifiers on mental health and behavior. Their findings were just published in Scientific Reports.

For their study, researchers added two common emulsifiers – cellulose gum and polysorbate 80 – to the drinking water of lab mice for three months. They examined changes in their subjects’ behavior, microbiomes, and other physiological aspects.

“We confirmed,” they wrote,

Why should the outcomes differ by sex? The researchers aren’t sure, but it may have something to do with key sex differences in the way that the immune system works.

Of course, it should come as no surprise that what you eat can have an impact on mental health and behavior. The mind is one with the body, after all. Other research strongly suggests that the modern Western diet contributes to conditions such as depression and ADHD.

The good news is that even small dietary improvements may ease symptoms of depression considerably.

Hyperprocessed food products are a double-edged sword: They deprive us of many nutrients essential for good health while also delivering anti-nutrients that can further interfere with our health and well-being.

Again, for body – and mind – to thrive, you’ve got to give it the raw materials it needs: not products engineered in a lab but real food.