Almost Half of All Cardiometabolic Deaths Are Linked to Food

The fact that we live so much longer than our ancestors has less to do with medical science and technology than you might think. In fact, the largest gains in health have come about through better nutrition and hygiene. As a fascinating new article in Nautilus points out,

It turns out that much of what might have been considered normal age-related decline is strongly accelerated by disease and malnutrition early in life, even before birth. Babies of malnourished mothers, even those who received adequate nutrition after birth, are found decades later to have substantially elevated incidences of coronary heart disease, stroke, and hypertension. Survivors of childhood smallpox and whooping cough have generally higher levels of mortality in old age.

Yet although food is abundant in wealthy, developed nations such as ours, abundance doesn’t necessarily equal proper nutrition. For many, what we eat is, in fact, killing us, as a new study in JAMA points out. 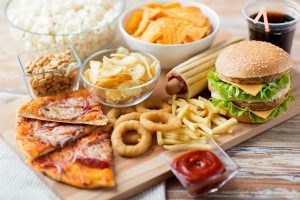 The research focused on the relationship between diet and cardiometabolic deaths – that is, deaths due to heart disease, stroke, and type 2 diabetes. These are the #1, 5, and 7 leading causes of death overall in the US.

Analyzing data from annual government surveys on diet, the National Center for Health Statistics, and a variety of studies and clinical trials, the authors found that almost half of all cardiometabolic deaths – 45.4% – could be linked to diet.

Most of those deaths – almost 10% – were attributed to eating too much sodium, something anyone eating a diet of largely processed foods – the Standard American Diet – will easily do. Even a “healthy” takeout sandwich – say, a Chipotle Chicken Avocado Melt from Panera – can deliver almost a full day’s worth of salt.

As for other dietary factors:

The authors also found that diet-linked deaths were more common in men, younger adults, and African-American and Hispanic populations.

Of course, none of this proves a cause-effect relationship; nor did the authors consider all dietary factors that affect health and disease. Diet is complex, multifaceted, after all. Yet we also know from other research that many of the “missing” foods they noted – nuts and seeds, vegetables, fruit, seafood or other sources of omega-3s – have protective effects. They also tend to take the place of less healthy food choices.

We do well when we focus less on avoiding the bad, more on including the good. That good, as ever, starts with a diet based on whole food, real food – the food your body was designed to thrive on.