Belly fat is notoriously hard to get rid of, especially as you get older. A sedentary lifestyle. A less than optimal diet. Chronic stress. Hormonal imbalances. Combine all those, and you wind up with stubborn fat around the waist. (Here’s a good, easy-to-understand explanation of why it’s the riskier kind of fat to carry around with you.)

No surprise, then, to see a lot of recent excitement over new research out of Penn State, presented last Wednesday at The Obesity Society’s Annual Scientific Meeting. Canola oil, the researchers said, may help reduce body fat specifically.

Kris-Etherton and colleagues found that after one month of adhering to diets that included canola oil, participants had .11 kilograms, or a quarter pound, less belly fat than they did before the diet. They also found that the weight lost from the mid-section did not redistribute elsewhere in the body.

Why might this be? The research points toward the monounsaturated fat in canola oil. And indeed, the amount is far higher than in the non-canola vegetable oils they also included in the study – corn/safflower and flax/safflower.

But is it the best source? Or even just a very good source? 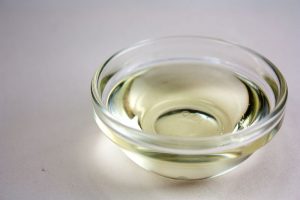 Canola oil is highly refined. The extreme processing and “purification” it undergoes significantly changes the oil’s composition. Much of the omega-3 fatty acid it contains gets turned into the worst kind of fat you can eat: trans fat.

It also contains a fair amount of polyunsaturated fat. It’s not heat-stable by any means. Those polyunsaturated fatty acids oxidize quite readily during cooking, releasing damaging free radicals in the process. They fuel chronic inflammation. They accelerate aging.

Polyunsaturated oil isn’t something we were designed to eat large amounts of. Even a single tablespoon of canola oil gives the max recommended limit of 4-5% of daily calories.

Yet another reason to steer clear is that nearly all canola oil is GMO. And as Dr. Axe puts it,

The side effects of GMOs in general cannot be overstated. In a 2011 review published in Environmental Sciences Europe, 19 studies of mammals fed GMO soybeans and corn were evaluated. The 90-day long trials indicated liver and kidney problems as a result of GMO foods. Kidneys were disrupted by 43.5 percent and liver by 30.8 percent.

And there’s plenty of other research on potential health effects that gives pause.

But even if eating GMOs posed no risk, there’s still the fact that their cultivation is environmentally harmful, requiring even greater use of pesticides – not to mention other chemicals used in industrial farming that wind up polluting our environment, as well. What affects our environment affects us.

Besides, there are much healthier options out there. Olive, avocado and many nut oils are even higher in monounsaturated fats than canola. So why didn’t the Penn State study consider these, especially when we already have quite a bit of evidence that monounsaturated fats in general can help burn belly fat in particular?

Consider: Funding for the research came from the Canola Council of Canada and Agriculture and Agri Food Canada, among others. (Canola is BIG business in Canada [over $19 billion dollars a year]!)

Of course, that alone doesn’t negate the findings. It does make you raise an eyebrow…

Image by veganbaking.net, via Wikimedia Commons